Amy Miller, P.E., Director of the Madison County Department of Solid Waste, was elected president of the Association at the fall conference in Lake Placid.

She joined the Board in 2018 as an at-large member, then moved to secretary before becoming vice president in 2019.

David B. Rhodes, Director of the Fulton County Department of Solid Waste, was elected vice president. He first joined the board as North, Region 1 in 2018. He also serves as one of the five NYSASWM representatives to the Federation of New York Solid Waste Associations board.

Sue McIntyre, Director of the Delaware County Department of Public Works, and Patricia Pastella, Director of Transfer Operations at OCRRA, continue as treasurer and secretary respectively.

The Board thanked William A. Rabbia, Executive Director of the Oneida-Herkimer Solid Waste Authority, for stepping in to serve as president since February, when Rich Bills stepped down as he took a position in private industry.

At the fall conference in Lake Placid, board members who were elected/re-elected are:

Stephen Aquario, Executive Director of NYSAC, was reelected to another term as At-Large. Andrew Opperman of the Oneida-Herkimer Solid Waste Authority, was also elected to an At-Large position, following his appointment to fill a vacancy.

Elected to 3-year terms were Jenn McDonnell, Director South 1, of the NYCDOS Bureau of Waste Management, and Brian Wohnsiedler, Landfill Superintendant for the Development Authority of the North Country, as Director North 1. Steve Orcutt, Assistant Commissioner Solid Waste for Steuben County was reelected to another term as Director West 1.

Josh Olbrys, Deputy Executive Director of the Oneida-Herkimer Solid Waste Authority was elected to Director, Central 2, filling out the term previously held by James Biamonte who retired at the end of last year; and Mellissa Rotini, Assistant Commissioner, Environmental Management with the Westchester County Department of Environmental Facilities was elected to fill out the Director East 1 term previously held by Mario Parisi, who retired earlier in the year.

Kevin Wood of NYSDEC gave the oath of office to new and returning officers and board directors.

James V. Biamonte was the recipient of the 2021 Solid Waste Achievement award.

The award was presented by Rich Bills, president, who noted the award is presented to a solid waste professional who has dedicated their career to the field and contributed to NYSASWM’s mission of promoting efficient, effective, and environmentally sound practices.

He noted that Mr. Biamonte, who served as Environmental Coordinator for the Oneida-Herkimer Solid Waste Authority, is well deserving of the Award.

Mr. Biamonte has been with the Oneida-Herkimer Solid Waste Authority since March 1989. He was responsible for conducting and reviewing studies and analysis, in addition to providing recommendations on environmental, economic, and legislative impacts and developments as they relate to comprehensive solid waste management. He also served as Contracting Officer for the acquisition and disposition of Authority property.
Jim was instrumental in developing a comprehensive local solid waste management plan for the Oneida-Herkimer region. He also played a role in the Authority winning its landmark case in the United States Supreme Court that has set a national precedent for public solid waste systems.

Jim served as NYSASWM president from 2002-2003 and subsequently served on the board.

He holds an A.A. degree from Mohawk Valley Community College and a B.A. and M.P.A. from the State University Center at Albany.

In presenting the award, Bills noted that NYSASWM congratulates and recognizes the exceptional leadership and accomplishments by Mr. Biamonte and extends the highest level of appreciation and commendation.

(Mr. Biamonte retired from the OHSWA at the end of 2021, and presently works for Barton & Loguidice Engineers, D.P.C.) 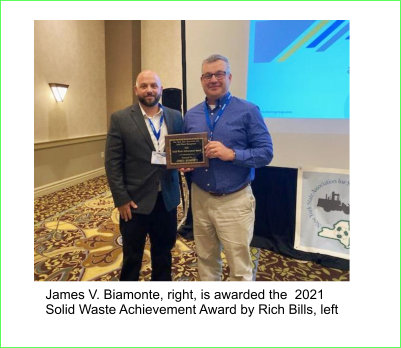 PFAS and Your Local Landfill – Managing Risks & Preparing for Regulations

The solid waste achievement award is designed to recognize an outstanding leader in the field of solid waste, or an outstanding program. This is a way to bring exceptional programs to the attention of members throughout the state.

The individual awarded (or one representative from the awarded agency) will receive a plaque and a free registration to either the March training course, or fall conference, their choice.

Nominees will be reviewed by the Executive Committee of the NYSASWM board, and the award will take place at the fall conference.

Please use this form for for your nominations. 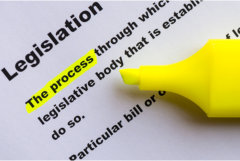 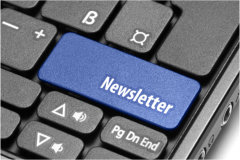 Become part of a growing number of New York State solid waste professionals who have the desire to grow their skills and leadership abilities.

Joining NYSASWM is a great way to network with other solid waste professionals.